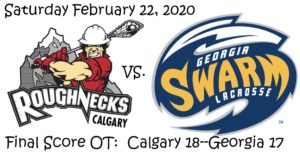 One player can make a difference.  Roughneck’s Captain Dane Dobbie (6G, 1A) returned to the line-up after a six-game absence Saturday night and led Calgary to their first win ever in Atlanta.  His floor presence ignited the Roughneck stars.  Rhys Duch (4G, 4A) and Curtis Dickson (5G, 5A) had arguably their best games of the season in his return.  The Calgary Roughnecks (4-4) needed extra time to defeat the Georgia Swarm (5-4) in front of the 7,818 fans at the Infinite Energy Arena. Georgia didn’t roll over and this high scoring affair ended in sudden death overtime.  They were led in the losing effort by Zed Williams (5G, 1A) and Randy Staats (4G, 4A).  Final Score:  Calgary-18, Georgia-17.

Dobbie missed a third of the 2020 NLL season but wrapped up his six-game suspension handed down after a penalty in the first game of the year. Calgary has struggled without their team captain. His return now allows the team to focus more on their defence of their championship last year.

“You can’t quantify it. Dobbie says the right things at the right times, he leads by example, he calms the group down, and he gets the group excited. He gives us the belief when the game is tied and when he gets the ball, we know he’s going to put the team on his back. You see Curtis Dickson and how well he played, those guys are just such good friends, and they feed off of each other. It gives us that dynamic duo up front. It changes everything.” – Calgary Coach Curt Malawski

It didn’t take long for Dobbie to get back into the mix.  With so much time off his conditioning and lacrosse ability were a big question mark. Within the first two minutes of the game his play had a positive effect on the Roughnecks.  He assisted on Dickson’s opening goal and beat Swarm goaltender Mike Poulin on his first shot to put them up two in the first.

Calgary looked like a focused championship team and moved the ball well on offense.  Dickson, who struggled mightily in Dobbie’s absence seemed as composed as ever and honestly looked like he was having fun.  Notable in the first quarter as well, Duch reached a personal milestone with his 400th career goal when he scored low glove side putting the Roughnecks up 5-2.

The usual stingy Calgary defense looked lost at times as some communication errors on picks allowed the Swarm openings just big enough to put the ball in the net. Calgary goaltender Christian Del Bianco is very mobile between the pipes and the Swarm fired low shots, taking advantage of difficult to save bounce shots to score.  Georgia shooters waited just a split second before they shot to get Del Bianco to move or drop to his knees and create an opening.  The agile tender made it to the score sheet with one assist in the second quarter on a long pass to Dickson coming off the bench. Del Bianco finished the night playing 61:40 min and stopping 47 of 64 shots.

The second half of this matchup saw Georgia out score Calgary 3-2 in the third and the back and forth gained momentum in the fourth.  The Swarm outscored the Roughnecks 8-6 in the final quarter to tie the game 17-17 in regulation.  Dobbie gave Calgary the 17-16 lead with 51 seconds remaining, but Lyle Thompson (2G, 1A) found the net from outside up top with 27 seconds on the clock to tie.

The sudden death overtime period was quickly decided by Dobbie.  Dan Taylor (1G, 5A) set a pick near the restraining line and Derek Downs (5A) set a seal down low to get the captain open.  The goal came just 1:40 in.  This game had everything desired in a lacrosse game.  It was physical on both ends of the floor, the score stayed close enough that at any moment the tide could change, and the back and forth in the final quarter was enough to have you on the edge of your seat. Final Score:  Calgary-18, Georgia-17.