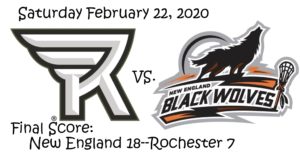 On Saturday night, the New England Black Wolves (5-3) hosted the Rochester Knighthawks (1-8), for the first meeting between the two teams.  The Knighthawks of last year are in Halifax, and this new Rochester expansion franchise is not as bad as their record leads you to believe.  Up until this game, five of their seven losses have been by three goals or fewer.  They visited a New England squad that had dropped three straight games at home and needed a win to turn things around.  After a slow start from the Black Wolves, typical of the last few games they have played, they were able to turn it around and run away from the Knighthawks.  Led by Callum Crawford (4G, 8A) and with a stellar game from goalie Doug Jamieson (35 Saves) the Black Wolves stifled the Knighthawks in the second half.  Much to the satisfaction of the 5,328 fans in attendance, frustrations boiled over in the fourth.  Greg Downing (1A) squared up with Rochester forward Shawn Evans (3A) and in the end, the penalty minutes assessed outnumbered play time.  Final Score:  Rochester-7, New England-18.

New England dug themselves a hole early, allowing Rochester to gain a 2-0 advantage in the first eight and a half minutes.  An early penalty gave an opening for Holden Cattoni (3G) to score a powerplay goal 2:50 in.  Dan Lintner (1G) doubled the lead 8:22 in with his lone goal of the game.  New England went 0-3 on powerplay opportunities in the first quarter but scored on all seven of their advantage opportunities through the remainder.  New England didn’t get on the board until the final minute.  Crawford tallied his first with 47 seconds on the clock, and immediately off the ensuing faceoff, Joe Nardella (1G) won the draw and took it all the way to the net.  Nardella was as good as it gets from the circle, going 21-30 on the night.  At the end of the first quarter, New England and Rochester were tied 2-2.

The Black Wolves turned the tables in the second quarter, scoring three straight in the first eight and a half minutes.  Tony Malcolm (2G, 1A) broke the tie 4:13 in, scoring a big transition goal.  Mr. Dependable, Joe Resetarits (3G, 1A), followed just over two minutes later to double the lead.  Reilly O’Connor (3G, 2A) who has been struggling to put the ball in the net recently, started the streak of power play goals with a bomb from outside and 6:44 on the clock.  Rochester temporarily stopped the onslaught when Frank Brown (1G) scored a minute later.  New England capitalized on their transition again to answer.  This time Adam Bomberry (1G, 2A) took it the length of the floor on an assist from O’Connor.  Just under two minutes later, Stephan Leblanc (2G, 3A) increased the New England lead to 7-3.  Rochester got a late power play goal from Cattoni, his second of the game, before the half.  At half time, New England led Rochester 7-4.

A late penalty on Rochester in the second, allowed the Black Wolves to start the half with a power play.  Resetarits only needed 1:11 to find an opening to score.  The goal started a run and momentum was clearly swinging New England’s way.  O’Connor notched his second before Resetarits scored his hat trick goal 4:33 in.  Again, Cattoni supplied the answer but this time shorthanded.  With 6:09 remaining in the third, Rochester was down 10-5.  On the next Black Wolves possession, and still on the power play, Jordan Durston (1G, 2A) buried a shot from in close.  Over three minutes passed before Colton Watkinson (1G, 2A) increased the lead to seven with a transition goal.  It was sweet redemption as an earlier goal of his was called off due to a penalty on the back end.  Rochester got one back before the close of the quarter when Cory Highfield (1G, 1A) scored with 15 seconds left.  At the end of three quarters, the Black Wolves led the Knighthawks 12-6.

Callum had no plans of allowing Rochester back in the game scoring the first three goals of the final quarter in six and a half minutes.  Two of them came on the power play.  In fact, New England scored six straight over the first twelve minutes, holding Rochester scoreless, to put the game away.  Rochester attempted to gain some traction by pulling Rylan Hartley in favor of Craig Wende for some time, but it didn’t stop the onslaught.  58 penalty minutes were assessed in the final frame, highlighted by the Downing and Evans fight with 4:42 left on the game clock.  Within a minute of that ending, Turner Evans (3A) from Rochester was also assessed a separate 10-minute Game Misconduct.  New England missed the awarded penalty shot but scored the last two of their run on the man advantage.  Rookie goaltender Ethan Woods replaced Jamieson for the last few minutes of the game, and a Curtis Knight (1G) shot trickled through for the final goal of the game.  This win was a confidence boost for the Black Wolves as they halted their three-game skid.  Rochester is still looking for the winning formula as they drop to 1-8.  Final Score:  Rochester-7, New England-18.