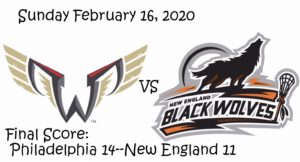 On Sunday night, the Philadelphia Wings (7-3) visited the New England Black Wolves (4-3) for their second game in as many nights.  Just like their first meeting of the season, the winner of the game would claim first place in the East Division.  Unlike the first meeting of the season, the Wings left victorious, but it wasn’t easy.  After taking a commanding lead to start, the Wings allowed the Black Wolves back in and in the start of the fourth quarter fell behind.  But, on the shoulders of Matt Rambo (6G, 1A), they persevered.  The win places Philadelphia in first place in the East Division and wrapped up a weekend that saw them win twice on the road.  Final Score:  Philadelphia-14, New England-11.

The first quarter could not have started any better for Philadelphia.  They scored three goals on their first three shots all within the first three minutes.  Rambo scored the first 55 seconds in and then the second just over 30 seconds later.  Brett Hickey (3G, 3A) tallied the third and the onslaught didn’t stop there.  Ryan Wagner () scored to make it 4-0 with 6:30 remaining in the opening quarter.  New England couldn’t get anything started on offense.  Passes were batted down; plays were disrupted, and Wings goaltender Zach Higgins stood tall in net saving all 11 shots the Black Wolves threw his way.  At the end of the first quarter, Philadelphia led New England 4-0.

The momentum continued into the second quarter.  The Wings players were showing no signs of fatigue early on after playing in Buffalo less than 24 hours before.  Even man down, the Wings were connecting as Rambo completed his hat trick just 2:38 in while Kiel Matisz (1G, 1A) was in the box.  New England found themselves down five early.  Pressing the ball down the floor, the Black Wolves transition stars broke the drought.  Adam Bomberry (1A) found a streaking Colton Watkinson (1G, 1A) breaking down the turf.  Watkinson lowered his shoulder through the lone defender and scored causing the entire arena to leave their feet.  Even more exciting, was the fact the goal came man down.  On the next possession though, Josh Currier (1G, 3A) took advantage of the power play and brought the lead back to five.  Over five minutes of scoreless lacrosse followed.  The Wings started to show signs of fatigue, but neither team could break through until Tony Malcolm (1G) scored New England’s second transition goal with 4:43 remaining in the half.  The goal sparked the team and New England finally found success five on five.  Joe Resetarits (4G) and Callum Crawford (3G, 3A) both scored in a set offense before the whistle.  At the half, Philadelphia led New England 6-4.

New England carried the momentum through halftime.  Just 1:18 in, Crawford found Jordan Durston (1G, 1A) sneaking to the middle and Durston easily finished in close.  Tense minutes followed before Resetarits tied the game at six.  New England would not take the lead just yet though, as Hickey found the net for his second with 4:33 remaining.  Keeping with the back and forth, Crawford notched his second goal with under a minute remaining leading us to the final quarter with the teams tied 7-7.

The Black Wolves took their first lead of the game 4:19 into the fourth quarter.  Resetarits scored his hat trick goal and ignited the arena.  With a physical game up until this point limiting the goal scoring, it was surprising to see the offenses find so much success in the fourth.  Ten more goals were scored before the final buzzer.  The Wings put together a two-goal run to take the lead back started by a Rambo score.  Kevin Crowley (1G, 5A) made it 9-8 before Resetarits tied the game yet again.  The Wings responded with another two-goal run.  Hickey completed his hat trick before assisting Rambo on his fifth goal of the night.  30 seconds later, Greg Downing (1G) scored a beautiful transition goal and the Black Wolves were again down one with 6:20 remaining.  Just over two minutes passed before Rambo tallied his sock trick goal.  Time was not on New England’s side and Doug Jamieson was pulled in favor of an extra attacker.  The plan backfired and Nick Finley (1G, 1A) scored his first NLL goal on the empty net.  With time continuing to dwindle down, New England Coach Glenn Clark took a chance and kept Jamieson on the bench for the faceoff.  Trevor Baptiste (1A) won the faceoff and hit the cross bar on his attempt at the empty net.  Matisz corralled the rebound and scored with 1:48 remaining.  Crawford scored his hat trick goal with 15 seconds left to bring us to our final.  Final Score:  Philadelphia-14, New England-11.