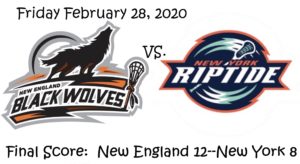 The New England Black Wolves (6-3) visited the New York Riptide (1-10) on Friday night for the second meeting of three between the two East Division rivals.  This game was nothing like the first meeting where the Black Wolves won easily.  Plagued by slow starts, New England again found themselves behind early.  A six-goal run between the second and third quarters, as well as the defense holding the Riptide off the score board for the entire third, changed the tide and eventually led to the third road victory in as many tries for New England.  Final Score:  New England-12, New York-8.

While the Black Wolves are undefeated on the road, winning all three contests by a score of 12-8, their trend of starting games slow continued in New York.  After Callum Crawford (3G, 5A) scored the opening goal 1:16 in on a power play opportunity, the Riptide answered with three straight to take the lead.  Earlier this week they traded away Tyler Digby, their leading scorer, to Colorado for picks.  Without him the Riptide hope to see their younger players get more playing time and early in this game they were on fire.  Jean-Luc Chetner (1G, 2A) tied the game on the Riptide’s first power play opportunity, and Kieran McArdle (1G, 1A) gave the Riptide the lead with 5:41 remaining.  McArdle played an interesting role in this game, seeing a lot of time on the offense and defense.  The Black Wolves offense looked lost at points as the ball stuck and little movement was created.  When the ball did get to the net, Gowah Abrams who got the starting nod over Alex Buque, made the save.  Rookie Travis Longboat (3G, 2A) extended the lead scoring with just under two minutes remaining.  At the end of the first quarter, New York led New England 12-8.

Crawford again opened the scoring in the second quarter, but New York answered with a two-goal run to keep the separation.  Longboat and Dan Lomas (1G, 1A) scored less than two minutes apart and New York held a 5-2 lead with 9:11 remaining in the half.  Then it all clicked.  New England’s defense put on heavy pressure and the offense found their confidence.  Joe Resetarits (3G, 3A) scored two straight goals to end the half and get the Black Wolves within one before the break.  The break didn’t slow them down and they scored four in the third while holding the Riptide to zero.  Tony Malcolm (1G) opened the scoring with a transition goal 1:27 in.  Reilly O’Connor (3G, 3A) put the Black Wolves ahead for the first time since the opening goal before Crawford completed his hat trick.  Stephan Leblanc (1G, 2A) scored the sixth straight Black Wolves goal with 2:37 remaining and at the end of the third the Black Wolves held an 8-5 lead.

The Riptide fought in the fourth quarter, but New England had an answer each time.  New York rookie Gail Thorpe (1G) scored to open the quarter, but New England rookie Andrew Kew () followed with a goal just over a minute later.  Connor Kelly (1G, 2A) finally got on the scoresheet to bring New York back within three, but O’Connor responded on the powerplay followed by a hat trick goal for Resetarits.  With under five minutes remaining the Black Wolves had a four-goal lead.  Longboat scored with 2:23 remaining to grab his first career hat trick, but O’Connor completed his hat trick with 1:48 remaining to bring us to our final.  It is worth noting that three of the four goals scored by New England in the fourth quarter came from the left side of the offense, a group that was struggling during the three-game losing streak.  Also, Black Wolves goalie Doug Jamieson recorded his 1,000th save in his fourth year in the league.  The young goaltender has been outstanding in his first year as a full-time starter.  Final Score:  New England-12, New York-8.