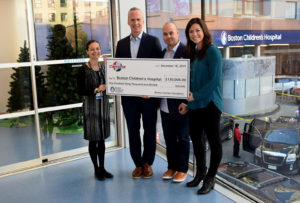 QUINCY, Ma. – The Boston Cannons announced today a $130,000 donation to Boston Children’s Hospital for 2019. Funds for this donation were raised through events hosted by the Cannons over the course of 2019.

Finally, the Boston Cannons hosted a Networking Happy Hour in the front office in Quincy, MA, on November 6. The Cannons invited sponsors, colleagues and brand partners to attend the event, which featured a 2019 season recap and 2020 sneak-peak by Cannons President Ian Frenette, appearances by Cannons players Nick Marrocco and James Fahey, a raffle, and more. The event also featured a Reed’s Ginger Beer Moscow Mule Bar and a full bar sponsored by Nantucket Natural Blends Vodka. The food was provided by Victory Point-Marina Bay.

The Boston Cannons look forward to hosting events throughout 2020 benefiting Boston Children’s Hospital and continuing our commitment to the world’s No. 1 children’s hospital.