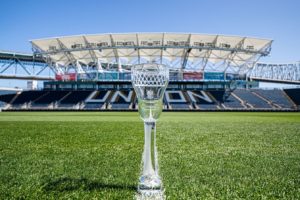 On Saturday September 21, 2019 PLL history was made as the Inaugural PLL Championship game took place at Talen Energy Stadium in Philadelphia, PA.  Whipsnakes LC the No. 2 seed hosted Redwoods LC the No. 4 seed in what would turn out to be one of the most exciting games of the season.  What started out a tied game in the first would turn into what by the looks of it would be a Whipsnakes blowout; only for the Redwoods to fight their way back in the fourth.  But in OT, the winner of the Jim Brown MVP Award and Attackman of the Year Matt Rambo would not only tie the game with 21.12 seconds in the fourth, he would go on to score the game winning goal 28 seconds in OT.  Final Score OT:  Whipsnakes 12—Redwoods 11.

The first quarter was all stellar net minding and turnovers by both teams.  Whipsnakes would win the opening face-off but couldn’t capitalize.  After a change of possession, Redwoods would get on the board first 1:25 into the game.  Matt Kavanagh (2g, 2a) would come up from the left wing off the pick, run through the check and fire it short side high to low giving them the lead 1-0 which they would not see again until there was only 1:36 remaining in the third.  With 8:59 remaining in the first, Matt Rambo (3g, 3a) would post up on the roll back to his right hand and bury it far side to tie it at 1-1.  That would be it in the first as Tim Troutner would notch 3 saves; and his counterpart Kyle Bernlohr would notch 5.  Score at the end of one:  Redwoods 1—Whipsnakes 1.

Another slow start in the second and the ‘Snakes would tally five.  Rambo from X, would send the skip pass to John Haus (3g, 1a) he planted and found a spot using his defender as the screen and came over the top to put it near side with 3:59 gone off the ticker giving them the lead which they held until late in the third.  Drew Snider (1g) was next to get on the board off the cross field pass with the quick catch and release at the 4:42 mark increasing the gap 3-1.  With 5:28 left, Jay Carlson (1g) would grab the skip pass in front of the crease and as he was falling down made the one handed shovel shot on the outside to keep the run alive.  The Whipsnakes had the momentum and Joe Locascio (1g) with a perfectly placed bounced shot on the short side would increase their lead by four 5-1 with 4:29 left in the first half.  Redwoods needed to figure something out before the half and try to put something on the board.  At this point the sun was starting to create some issues as well.  As the clock was winding down, Brent Adams (1g, 2a) midfielder for the Redwoods was standing across the midfield line in ‘Snakes territory and with .3 seconds left let one rip and the ball hit twine just over the shoulder far side on Bernlohr.  It was thought to be a two-point goal, but after review the ball had tipped off the stick of Wes Berg (2g), attackman for Redwoods so it was declared a one-point goal and credit given to Berg.  This gave Redwoods a bit of a spark heading into the half.  Score at the end of two:  Whipsnakes 5—Redwoods 2.

Unfortunately for the Redwoods, they couldn’t carry enough of that spark from the end of the second into the start of the third.  Another slow start in the frame and two more goals for the ‘Snakes.  John Haus would hit back-to-back goals.  The first coming from around the back of the cage, high to high he found top corner at 3:34; and the second for the hat-trick was a leaner with the head tip, he got Troutner to go low and he shot high finding the gap increasing their lead 7-2 at the 4:20 mark.  It took about four minutes before another point would go up on the board.  Redwoods finally left an opening for Mike Chanenchuk (1-2ptG, 1a) who has the most two-point goals in the league and he grabbed it.  Off the cross field pass from Haus, Chanenchuk fired the shot outside the two point arc which changed angles on the skip off the ground and Troutner was unable to make the save giving them a 9-2 lead with 4:04 left in the third.  With 2:26 left Redwoods would stop the run and score their first goal since the end of the second.  Jack Near (1g) from the back door, with a nifty spin dodge ripped it across his body and found an opening on the far side as he was diving through the crease.  They’d put up two more, the first from Ryder Garnsey (2g, 1a) with some trickery and an assist from Kavanagh, he used the spin move and ran through the check firing it stick side with 43.8 seconds left.  The final goal in the frame was a two-point goal from Sergio Perkovic (1-2ptG).  Near caused the turnover dished it to Perkovic who ripped it far side high to low through traffic closing the gap.  Score at the end of three:  Whipsnakes 9—Redwoods 6. 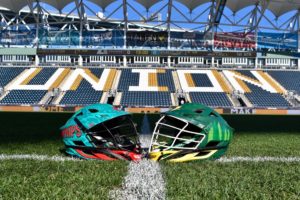 The fourth got off to a quick start with Redwoods getting on the board with another from Kavanagh only 1:59 in.  This one was a doozy, as Kavanagh was caught up in traffic; scrum after scrum ensued; after several turnovers, Garnsey nabbed the loose ball, made the flip toss to Kavanagh who saw no defensive presence near the cage and fired the bounce shot past Bernlohr closing the gap 9-7.  Whipsnakes would halt the momentum and the five-goal run off the skip pass from Rambo to Connor Kelly (1g, 1a) with the catch and two step finish high to high top corner with 7:57 left in the game increasing the lead back to three 10-7.  But a minute later, Garnsey with a tough angle shot low to high found the inside post off the tic-tac-toe feed and started a four-goal run for Redwoods. Brent Adams would head down the alley and hit top corner far side high heat with 6:28 left closing the gap 10-9.  Wes Berg would tie the game with 5:29 on a fluke shot.  Perkovic made the shot, Bernlohr made the save; the ball popped out of his stick and Berg was on the doorstep to catch the rebound and fired it over the shoulder to tie the game at 10 apiece, the first time the game had been tied since the 8:59 mark in the first.  Joe Walters (1g) would give Redwoods their first lead since the 1:25 mark in the first with a shot straight up the middle through the five-hole with the feed from Adams 11-10 and 1:36 left in the game.  Whipsnakes would call a time out with 30 seconds left in the game to set up their final play.  Rambo with the pick and a little room, found the opening off the flip play from Snider, he shot left to right high to low inside corner to tie the game with 21.12 seconds left on the clock tying the game at 11 apiece.  Neither team could score in the remaining seconds sending the game into sudden death overtime.

The OT rules in the PLL are clear, no time outs on either side.  The players make the calls on the field and as had been the case in the other OT games during the season, the team who wins the opening face-off wins the game.  This would be no different.  Whipsnakes face-off specialist Joe Nardella would create the scenario to give his team possession.  They’d pass the ball getting possession to Rambo who was able to get top side on his defender and fired the overhand shot far side high to low 28 seconds in OT for the win.  Final Score OT:  Whipsnakes 12—Redwoods 11.

Stars of the Game: