On Sunday August 18, and the final game of Week Nine of the PLL season, Whipsnakes LC (7-2) would go head to head against Redwoods LC (4-5) with yet another game which held playoff implications for the two teams.  Whipsnakes had already clinched a spot, but with a win today would clinch the final top two seed.  Redwoods on the other hand needed the win to hold onto one of the two remaining lower seeded spots.  The last time these two teams met in Atlanta on June 29, Redwoods would be the victor by the score of 14-11.  Today however, the tables turned in a battle which saw a record breaking low score of “goals held to” four for Redwoods.  Whipsnakes had one of their best outings this season and this was the second time they had scored eight consecutive goals.  Final score:  Whipsnakes 17—Redwoods 4.

Whipsnakes jumped out quickly with Matt Rambo (3g, 4a) scoring on the face-off win by Joe Nardella at 11:45 getting them on the board 1-0.  With some back and forth play, Whipsnakes would fire back once more with Mike Chanenchuk (1 2ptG, 3a) who leads the lead with two-point goals firing up another off the screen straight up the pipe at 7:03 on Tim Troutner who has given up the most two-pointers in the league to put them up 3-0.  With 1:01 left in the frame, Connor Kelly would set up the goal to a diving Ryan Drenner (2g) on the right side of the cage to close it out 4-0 and a shut out for Kyle Bernlohr in the first.  Score at the end of one:  Whipsnakes 4—Redwoods 0.

The second was a complete blowout for the Whipsnakes as they would have six different goal scorers in the frame and they would outscore Redwoods 8-1.  Drew Snider (3g, 1a) would start it off at 10:20 wide open on the back side with a transition goal on the turnover; Connor Kelly (1g, 2a) would get his ninth of the season at the 9:40 mark off a strong dodge sweeping all the way across the field with a low angle shot; Drenner got the feed from Chanenchuk went high and fired it home at 7:00; and Joe Locascio (1g, 1a) who was wide open would get the feed from Rambo to get his third of the season at 4:51 and their eighth of the run putting them up 8-0.  Redwoods would finally get on the board at the 4:14 mark with one from Sergio Salcido (1g) who was left wide open for the free run right to the cage and he hit a beauty top corner for their only goal of the half.  Whipsnakes would put another three on the board, another from Snider at 3:39; two more from Rambo at 2:18 and 2:07; and the final with 20.6 seconds with Jake Bernhardt on the run, Wes Berg would get caught on defense and he’d float one through Troutner for his fifth on the season to put them up by 11.  Score at the end of the first half:  Whipsnakes 12—Redwoods 1.

At the start of the third, Redwoods made a change in cage giving Gunnar Waldt the nod and Joe Nardella (1g, 2a) said “Hello” right away with a goal off the ensuing face-off straight down the pipe at 11:34.  A couple of minutes would tick off the timer and Whipsnakes would notch another as John Haus (2g) would score off the step down shot at 9:30 putting them up 14-1.  Redwoods hadn’t scored for 11:11 and would go on the man up.  Wes Berg would score on the open net when Bernlohr came out of the cage for the ground ball; Berg scooped the GB and fired on the open net at 8:35 to give them their second on the day.  They’d score another on the man-up when Whipsnakes would get called for a crosscheck to the head at 6:29 and Jules Heningburg (1g, 3a) would get the skip pass and score his 23rd of the year at the 5:57 mark but that would be it for Redwoods in the third.  Whipsnakes would put up three more, another from Haus at 3:59; one more from Snider at 2:18; and the final in the frame from Rambo off the face-off win by Nardella with a sweet back handed flip for the score at 2:07.  Score at the end of three:  Whipsnakes 17—Redwoods 3. 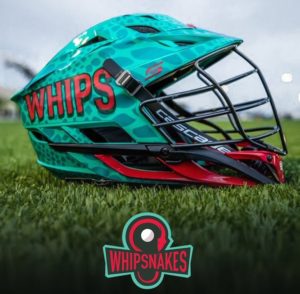 With the final 12 to go and Redwoods having been unable to find any offense during the game, Troutner headed back in between the pipes for Redwoods.  The fans would see only one goal and that would come from an Ontario native, Redwoods attackmen Clarke Petterson at the 8:36 mark.  Petterson was in tight and with the nice feed from Heningburg; he’d fake high then went low and as he was falling hit far side low notching his first goal since Week Four.  That would be it for Redwoods, but as a consolation they would shut out Whipsnakes in the fourth.  Final Score:  Whipsnakes 17—Redwoods 4.

With the final week of the regular season next week, this weekends “goals against” Redwoods has played a huge part in their chances for a playoff spot.  They now have a -13 score differential dropping them below Atlas who sits at a -10 putting them in the #4 position.  Archers has moved into the third position with a +3 score differential and a 4-5 record putting them ahead of Atlas.  With three teams, Archers; Atlas; and Redwoods with identical records, it’s the ever present score differential that will be the key as to who will clinch the final two playoff spots.

Whipsnakes LC (6-3) will face Archers LC (4-5) for the final game of the regular season on Sunday August 25, game time 4:30 p.m. EST and you can catch the action on NBCSN.  Whipsnakes has clinched a playoff spot, but Archers must win to lock in their spot although they have a better chance of holding onto that spot than both Atlas LC and Redwoods LC.

This is the last weekend of the regular season before the playoffs begin on September 6 in Columbus, OH.