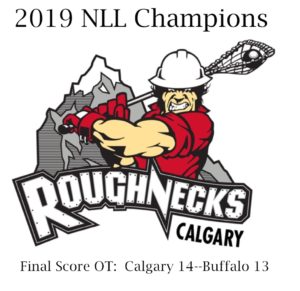 On May 25, 2019 the Western Division Champion Calgary Roughnecks after having defeated the Eastern Division Buffalo Bandits on their turf last Saturday May 18, had the chance to close out the series final and walk away with the Champions Cup at home in front of 17,038 Riggers fans and they did not disappoint.  The game was a non-stop track meet and the score would go back and forth throughout the night and both teams would keep the fans in the stadium and those watching from afar wondering if there would be a game three.  But in the end, Calgary after having fought their way to get to the playoffs would fight their way to victory and hoist the cup in spectacular fashion.  Final Score in OT:  Calgary 14—Buffalo 13.

Calgary would open up the game with their first of five power-play goals on five attempts. This one off the behind-the-back pass from Jesse King who wrapped it around the defender to get it to Dane Dobbie (4g, 3a) who hit far side around the screen at 2:32.  Christian Del Bianco was fired up and finding ways to keep Buffalo out of net for almost three minutes until Shawn Evans (2g, 5a) off the back end up and over the shoulder of Del Bianco got the goal putting him 10th all-time in NLL goals to tie it up.  About three minutes later, Riley Loewen (2g, 2a) wasn’t picked up by the Bandits defense and hard drives to the net, put his head down and dove cross crease to put it far side at 8:39 putting the Roughnecks back up by one.  Somehow Buffalo was able to put together a three goal run and silence the crowd.  It started with Chris Cloutier (1g, 3a) who had sat out the last couple of games.  Bandits Head Coach John Tavares was asked about Cloutier, and said given the low scoring in the previous game, he wanted to mix it up a bit and felt the rookie could add some spark.  Cloutier from the outside sent a nice sub shot with an outside rip low to tie it at two apiece at 9:12.  They’d notch another two, the first from Chase Fraser (3g) with a hard drive to the net as he went airborne faked right, then fired left with the slam dunk over the right shoulder at 10:01; and the second on the power-play by Corey Small (2g, 2a) his fifth PP goal of the post season, as he was all alone on the door step to get the rebound giving Buffalo a two goal lead 4-2.  Calgary would notch the final in the frame with a dip and dunk by Curtis Dickson as he streaked straight into the offensive zone, pump faked low and brought it back short side high.  Shots on goal were in favor of Buffalo 13-8.  Score at the end of one:  Buffalo 4—Calgary 3.

Although Buffalo started off the second at the 1:49 mark with credit going to Shawn Evans (2g, 5a) who made the shot on goal and Del Bianco making the initial save, as he dove back to find the ball, with the unlucky break he knocked it in with his left hand.  Given that unfortunate series of events, Buffalo would have only had one in the frame.  But as luck would have it, the Riggers would go on a spectacular five goal run, three of which were power-play goals.  Jesse King (1g, 5a) was perfect with the overhand stroke from the outside corner to snipe it top side to start the run with the first of three man-up goals to get them to within one 5-4.  Zach Currier (1g, 1a) would tie the game in transition as he stayed with the play and tracked it behind the net, scooped the loosie, jumped and dunked it in from the back side to tie it up at five a piece. Then in transition, Calgary with numbers restored the lead 6-5 as Tyler Burton (1g) carried it in right down the pipe and over the left shoulder of Matt Vinc.  Unfortunately for the Bandits, Vinc’s outlet pass was picked off by Greg Harnett short side, far side and the one-on-one with Tyler Pace (1g, 1a), make no mistake and the battle was won with Pace the victor and the score 7-5 and their second of three power-play goals in the frame.   The third man-up goal for Calgary was executed with perfection between Dobbie, King and Loewen with Loewen on the doorstep scoring over the left shoulder of Vinc at 11:31.  So far, the Roughnecks were four for four on their man-up opportunities and penalties were killing the Bandits.  Tavares needed to figure out what to do to keep his guys out of the box for the remainder of the game.  A couple of minutes went by and the Roughnecks got hit with their own penalty, a roughing on Mitch Wilde at 13:36 which sent him to the sin bin for two.  This would give Buffalo another opportunity to score man-up before the end of the first half.  At the 14:52 mark, off the stick of Chase Fraser he’d blister the five-hole past Del Bianco closing the gap to two.  But hold the phone; it took the Roughnecks only seven seconds for the team of Dobbie and Dickson to put one together.  The Bandit defense wasn’t ready and Dobbie went far side, Dickson sent the pass crossfield to Dobbie and with Del Bianco on the bench in favor of the 6 on 5, Dobbie goes far side on Vinc with .4 remaining in the half.  Shots on goal in the frame turned in favor of Calgary:  16-12.  Score at the end of two:  Calgary 9—Buffalo 6.

The fans would see nine full minutes of amazing net-minding on both sides of the floor while Del Bianco and Vinc showed why they helped get their teams to this point in the season.  Both making spectacular saves, like steal curtains between 4 x 4 cages, with fans stunned at their amazing skills. Buffalo wasn’t ready to go down without a fight and the tables would turn in the third as they would outscore the Roughnecks four to one.  Fraser would start it out on the power-play with a far-side deceptive shot low far side giving him the hat-trick and breaking the silence at 9:05.  Jordan Durston (3g, 1a) would continue the three goal run with his first post-season goal as he stepped in with a difficult low to high stinger side arm shot short side off the wall cutting the lead 9-8.  Matt Spanger (1g) would tie it up for Buffalo 9-9 off a transition pass and converts on the run on the front door at 11:26. On yet another power-play goal for Calgary, Dobbie, Duch and Dickson would team up with Dobbie once more scoring far side with another sub shot burying it five hole at 13:57.   Durston would close out the frame tying the game again, with a nice toe drag around the defender, as he split and faked the shot scoring at 14:24.  Shots on goal turned back in favor of Buffalo 12—11.  Score at the end of three:  Calgary 10—Buffalo 10.

This was it…do or die…or so everyone thought.  The final 15.  Each team would score three.  Calgary started it off with two.  Only 18 seconds in, Rhys Duch (2g, 1) out of nowhere, through the defenders came hard from the outside with an overhand shot through the screen to break the tie.  At the 1:06 mark, through another screen, Dickson with his fancy footwork in the top of the offensive zone sent a shovel shot through the five hole giving the Roughnecks a two goal lead 12-10.  The Roughnecks fans were screaming and on their feet.  An unfortunate mistake by Chad Cummings for elbowing at 5:52 would put the Bandits on the man-up and you can ever underestimate Buffalo, especially in the post-season.  Durston from the point, made the high upstairs shot giving him the hat-trick at 7:49 and closed the gap to one at 12-11.  The next three minutes were a non-stop track meet, shots at the cage, spectacular saves, balls hitting pipe, fans on the edge of their seats, and holding their breath.  At 11:07 Dhane Smith took a shot at the goal at the same time Chase Fraser was diving at the crease.  The ball crossed the plane of the goal and hits net.  The ref signals “GOAL”.  Immediately Calgary Bench Boss Curt Malawsky throws the challenge flag. The goal is reviewed from multiple angles and it is obvious that Fraser does not touch the carpet before the ball crosses the plane and the call stands “Good Goal”.  The game is tied at 12 apiece.  The fans are not happy, but the ruling is good and play resumes.  There is less than four minutes left in the game and it has become one of the most exciting games in NLL history.  As each team vies for possession, every second counts.  Calgary is next to score with another coming from Dobbie with the assist going to Del Bianco.  This was a thing of beauty.  Del Bianco sent an outlet pass to Dobbie who was in a one-on-one with Nick Weiss.  With Weiss on his back, Dobbie drives hard to the net, comes across left and shoots right under the left arm of Vinc as he pulls him to the right with 55.4 seconds on the clock.  The fans go wild and the Roughnecks go up 13-12.  With 27 seconds remaining in regulation, Buffalo gets possession and Small silences the Saddledome with a far side high shot to tie the game at 13-13.  The final face-off is a scrum with Currier somehow coming away with possession.  Malawsky calls the timeout with 18.8 seconds and makes the decision to go with the 6 on 5 with Del Bianco on the bench.  The Roughnecks pummel the Bandits net, but are unable to get a clean shot with the final shot by Dobbie hitting pipe sending the game into over-time.  Shots on goal still favored Buffalo 16—14.  Score at the end of regulation:  Calgary 13—Buffalo 13.

Would there be a game three?  The Roughnecks bench said “No”, while the Bandits bench was saying “You bet”.  Buffalo would win the opening face-off with Evans taking the first shot on goal 12 seconds in; followed by teammate Small 14 seconds after; Smith with a shot-0ff five seconds later; and Evans another six seconds later before Calgary even got a stick on the ball.  Dickson would be the first Roughneck to take a shot on the cage at 14:16 and immediately Calgary would call a time out.  In that time, Calgary Head Coach Malawsky and his players would work on their strategy to lock down the championship.  After the time out, it took only 28 seconds for the Roughnecks to score.  Rhys Duch would be the hero of the night as he would fire an outside shot hitting net short side to win the game giving the Calgary Roughnecks their first championship title since 2009.  Final Score in OT:  Calgary Roughnecks 14—Buffalo Bandits 13.