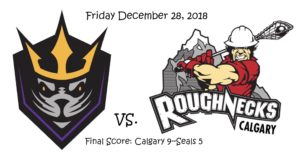 The Calgary Roughnecks (2-1) were looking for their second win and hosted the expansion San Diego Seals (1-1) at the Scotiabank Saddledome on Friday December 28, 2018. Calgary’s twelve thousand plus fans witnessed the Roughnecks to a 9-5 victory.

Seals starting goaltender (92) Frankie Scigliano and former teammate to Calgary’s goalie (35) Christian Del Bianco had some friendly banter throughout the week via text about tonight’s competition.

“There’s a lot of chirping throughout the week, kind of going back and forth joking who was going to owe who a beer, but it’s nice to come out on top, especially in that little friendly rivalry.” Del Bianco commented.

Rhys Duch (3G, 2A) opened the scoring for Calgary with a long shot from the point. Duch looking much at home in the Roughnecks line up, moving from point to crease on the right side of the floor. Shortly after the Roughnecks opening goal, on a pass from Seals goaltender Scigliano to a mid-floor breaking Brandon Clelland (1G) tied the game at one.

San Diego would control the second outscoring the Riggers two to 1. Cam Holding (1G) got it going with a shorthanded unassisted goal 13 seconds in.  After eight minutes of teeter-totter lacrosse, Chris Boushy (2G) would break the silence to tie the game at two.  But it was short lived as Dan Dawson (1G, 1A) would put the Seals up by one at 9:35 and that would be it for the first half.  Going to the locker room at half time Calgary found themselves behind by one (3-2) to the Seals in what was becoming a low scoring lacrosse game.

The back and forth continued as the Riggers Dan Taylor (1G, 2A) evened the score three minutes into the third from a Dane Dobbie feed.  Seals Casey Jackson (1G) would ‘dunk’ one past Del Bianco from behind crease. Dane Dobbie (2G, 4A) responded with a bouncer from the point as the see saw scoring continued.  At the end of three the score was tied at four apiece.

In the final fifteen of regulation time the Roughnecks found their scoring stride.  Dobbie would fire a shorthanded goal firing up the bench and the fans; leading to the Boushy goal followed by the Duch hat trick goal.  San Diego would see their lone goal of the frame as  Turner Evans would hit net on the power-play  on the Calgary illegal substitution bench minor by Reece Callies at the 5:03 mark.  Final Score:  Roughnecks 9—Seals 5.

Rhys Duch finished big with the Roughnecks contributing three goals and two assists in last night’s game.   Duch said, “I’ve been playing with zero confidence in my foot for a long time. It’s tough to mentally wrap your hear around an injury that’s lasted this long,”  and “most importantly, it’s about getting confidence in my foot, and I’m getting it and the team’s helping me find success with the plays and the procedures that we’re going with.”