The league finally got back to the action after having the previous week postponed due to COVID and the week before that for the Christmas holiday.  The Vancouver Warriors (2-2) who were sitting 3rd in the Western Division played host to the Colorado Mammoth (3-1) who were sitting 1st heading into last night’s contest.  The 4,830 fans who came to Rogers Arena in Vancouver, BC to see their team in action got to witness their team put seven goals up in the first four and half minutes stunning the lacrosse community, only to the wheels come off as they squandered the lead in the second allowing the Mammoth to get to within two at the end of the first half.  The two squads would battle back and forth for the remaining 30 but Colorado would come out victorious.  Both Warriors net-minders Alex Buque and Steve Fryer were also previous net-minders for the Colorado Mammoth which was a bit ironic having the entire goal tending squad having played for the same team. Final Score:  Colorado 18—Vancouver 15.

The Warriors would win the opening draw which started the momentum for Vancouver. Logan Schuss (2g, 1a) got it started scoring on the first shot of the game with a quick stick goal at 1:00.  Kyle Killen (4g, 3a) would float one over the top just 22 seconds later for a perfect 2 for 2 shots on goal and goals scored.  Vancouver pulled Buque on the delayed penalty and the six on five, Killen went low for his second on the night at the 3:22 mark putting them up 3-0.  Mammoth Bench Boss Pat Coyle would pull Ward and put in Tyler Carlson hoping to settle Ward down.  It took only 41 seconds before the Warriors would score on Carlson.  Mitch Jones (2g, 7a) went straight up the middle and just like that it was 4-0 Vancouver.  Almost four minutes into the game and Colorado hadn’t even take a shot on goal so something was definitely amiss.  Ward would come back into the game immediately following the goal but the break did nothing to settle his nerves.  Tyrell Hamer-Jackson (1g) took the next draw, flew down the floor and fired a laser straight down the pipe six seconds later 5-0 Vancouver.  Matthew Dinsdale (1g, 1a) would bounce one off the carpet short side high scoring at 4:21 sending Ward to the bench for the remainder of the game and a 6-0 lead.  With Carlson back in, the Warriors weren’t about to let up.  So 14 seconds later Brandon Goodwin (1g) with a crease dive goal would dunk it far side putting them up by a touch down 7-0. Colorado finally got a break off a “holding the stick” call against the Warriors at the 7:06 mark, but they would need to overcome the 78.6% penalty kill percentage the Warriors held which was 3rd best in the league.  Eli McLaughlin (3g, 4a) would get the flip toss from Tyler Digby and on the pump fake stutter step would find a piece of the net on a power-play goal to finally get Colorado on the board 7-1 at the 8:51 mark.  The Mammoth would put up another on the cut through the middle by Dylan Kinnear (1g, 1a), he’d go low through the five-hole with 5:46 remaining in the frame 7-2 still in favor of Vancouver. Killen would get his hat-trick, his first hat-trick as a Warrior with 4:28 left in the quarter off a snipe shot top corner using his defender as the screen and hit top shelf 8-2.  The Mammoth would go on a man-down and Vancouver would capitalize with one second remaining.  Adam Charalambides (1g, 2a) would get the rebound, head towards the cage and at the buzzer fire a shot on the crease with one second on the clock.  Pat Coyle would throw the challenge flag which would be overturned.  Since Colorado had already used a time out, they would go into the second quarter with a two minute delay of game penalty.  Shots on Goal at the end of one:  Vancouver 18—Colorado 7; Face-offs:  Vancouver 10-12—Colorado 2-12.  Score at the end of one:  Vancouver 9—Colorado 2. 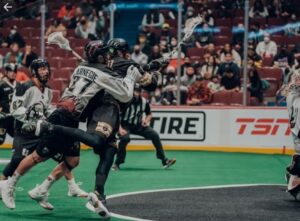 The Warriors got on the board quickly in the second with Schuss scoring only 37 seconds in on the man-up opportunity putting them up 10-2.  But the Mammoth would be the ones who would win this quarter outscoring Vancouver 8-3.  Chris Wardle (2g, 4a) got a nice feed from McLaughlin, slid through the middle and with a corkscrew shot, fired one left side hip high on Buque at 1:15 to start a three-goal run for the Mammoth.  Sam LeClair (2g, 1a) came up from the back side around the crease and caught Buque off guard short side at 1:59 making it 10-4.  McLaughlin found himself all alone in front of the crease and went low with a twister shot short side at 3:18 getting them to within five 10-5.  The teams would go scoreless for three and half minutes before Vancouver broke the silence.  Riley Loewen (2g, 1a) with a sharp angle shot over the top hit short side increased the gap back to six 11-5.  At the 8:02 mark Colorado went on a four-goal run with rookie Jalen Chaster (1g, 1a) notching his first career NLL goal in transition on the doorstep 11-6.  That fired up the Mammoth bench.  Connor Robinson (4g, 4a) fired a jump shot out of the offensive zone far side on Buque at 8:17.  Tyler Digby (2g, 3a) on another transition goal fired one high to low far side with 6:01 left 11-8 still in favor of Vancouver.  The run would end with a Sports Center goal from LeClair.  He’d come from behind the rack and dunk it in behind Buque and just like that the eight goal lead had vanished.  Vancouver’s Jordan McBride (1g, 2a) would halt the run with a back hand beauty and take out the trash off the rebound from Killen with 2:12 in the frame and the last goal for Vancouver in the frame.  LeClair would close it out for Colorado with 2.7 seconds on the ticker with an over the top bouncer shot and the crowd was silent.  Shots on Goal at the end of two:  Vancouver 32—Colorado 20; Face-offs:  Vancouver 20-24—Colorado 4-24; LB:  Vancouver 38—Colorado 28.  Score at the end of two:  Vancouver 12—Colorado 10.

The scoring slowed in the second half and it would be Colorado who would control the remainder of the game as the wheels came off for Vancouver and the momentum shifted.  Digby notched his second at the 3:41 mark barreling past his defenders jumped and floated across the crease cutting the leading 12-11.  Neither team would score for almost seven minutes. The Mammoth would break the scoring freeze when McLaughlin would tuck and go and fire it in deep in the shot clock for his hat-trick at the 10:02 mark to tie it up 12-12.  They’d get their first lead of the game at 11:06 off another Robinson goal from way out through the wickets at 11:06 putting them up 13-12.  That’s when Vancouver Bench Boss had seen enough and Buque was yanked in favor of Steve Fryer.  Buque was not happy about the move and you could see his frustration in the Warrior bench.  Jones would get the one and only goal for the Warriors tying it up at 13-13 only 10 seconds later when he picked up the loosie and hit far side top corner catching Carlson off guard.  That was the first Vancouver goal in 12 minutes and 28 seconds.  Once again, the Mammoth would close out the frame.  Ryan Lee (2g, 10a) would take his first shot on Fryer and score his first goal of the game with an over the top shot five-hole with 2:45 remaining on the ticker.  Shots on Goal at the end of three:  Vancouver 43—Colorado 36; Face-offs:  Vancouver 25—30 Colorado 5—30; LB:  Vancouver 54—Colorado 38.  Score at the end of three:  Vancouver 14—Colorado 13.

The hits just kept on coming in the fourth as Colorado would once again outscore Vancouver 4-2.  Robinson would notch his hat-trick only 44 seconds in coming around from the backside he’d hit the net far side 15-13 Colorado; and he’d notch his fourth on the pick and roll at the 3:40 mark on a bang bang play they had used multiple times before extending the gap 16-13.  Killen would halt the three goal run scoring one of the two Warriors goal at 6:47 when Jones threaded the needle and with a quick stick he’d notch the 30th goal of the game 16-14 still in favor of Colorado.  Lee would notch a man up goal for te Mammoth at 7:53 off the feed from McLaughlin with a nifty pump fake low to low skipper short side 17-14 Colorado.  With 5:06 to go, Loewen would notch one last goal for the Warriors off a Jones behind the back feed and Loewen dunked it on the doorstep 17-15 Colorado.  That was it for Vancouver.  The Mammoth notched the last goal with 2:31 remaining off a low shot from Wardle five-hole on Fryer.  Final Score:  Colorado 18—Vancouver 15.