Weekend One in the books for the MLL and it was a bit strange to watch teams that fans had grown to recognize their regular season rosters and see many of those names no longer there.  With the start of the Premiere Lacrosse League (PLL) this gave many players the opportunity to enter the game of professional lacrosse from the field level from not only the NCAA side, but also many players from the NLL.

The PLL has had a major impact on the teams in Major League Lacrosse.  We compared the 2018 stats on Pointstreak.com.  Now keep in mind, this lists all players that were on the rosters for each of the current MLL teams during the 2018 season whether or not they played the entire the season; were on injured reserve; on the PUP (Player Unable to Perform); etc. and here’s what we found, of course our numbers could be off by one or two, but it gives you an idea of the impact the new league has had.  These numbers represent the numbers of players that have moved from their former MLL teams to the new PLL and it’s pretty astounding.  With three teams from the MLL, the Charlotte Hounds; Florida Launch; and Ohio Machine all on hiatus, that put even more players into the pool.  So with the new rosters this season, let’s see what played out and how many players from each team were lost to the PLL.

The Outlaws would win the contest in a game that started out with New York ahead in quarters one and two.  Denver would outscore New York 7-3 in the third which was the turning point with Denver coming out the victor. Point leaders for Denver were Brendan Kavanagh (2g, 4a); Christopher Aslanian (2g, 1a); Tim Barber (2g); and Ryan Lee (2g).  John Grant Jr., would come out of retirement with 1g and 1a.  Dillon Ward was top notch in net as always making 19 of 28 saves with nine goals against.  Max Adler was at the face-off dot for the Outlaws winning 10 of 23.

On the New York side of the field, they would see eight different goal scorers.  Rob Pannell was held to no goals and only two assists which is virtually unheard of as he was the 2018 league MVP.  The Lizards would see goals from Dylan Molloy; Alexander Zommerfield; Steve Romano; Kevin Crowley; Mark Matthews (2g, 2a); Nicholas Galasso; Michael Begley; and Kevin McNally.  Austin Kaut was in net for New York and faced 22 shots on goal and made 11 saves.  Greg Puskuldjian took the face-offs for the Lizards winning 13 of 23. 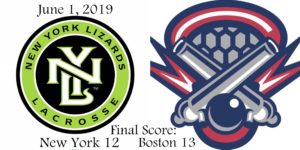 The Cannons would win their home-opener and the Lizards would drop two in a row.  Boston would start out 2019 in their brand new stadium, Veterans Field and attendance was high as they would see 5,200 Cannons fans cheer them onto victory.

The contest was close throughout, but it seems the key was that all important first quarter where Boston outscored New York 3-1.  In the remaining three frames, scoring was equal with the Lizards outscoring the Cannons in only the third and then only 3-2 but that wasn’t enough.

Austin Kaut was in net for the Lizards facing 26 shots on goal with 13 saves; while Nicholas Marrocco was in the cage for the Cannons and he saw 30 shots and stopped 18. 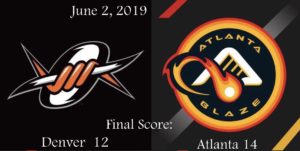 The Blaze would win their home-opener defeating the 2018 MLL Champions.  Atlanta would be the second Major League Lacrosse team to start the 2019 season in a new stadium.  The Blaze would open up in Grady Stadium and they’d treat their fans to a victory over the World Champs.

The two teams would equal goals in the first; third; and final frame, but it was the second that Atlanta pulled out the stops outscoring Denver 7-5 which was the deal breaker and the game winning quarter although the Blaze wouldn’t know it at the time.

The Bayhawks headed to the Ford Center in Frisco, TX to face off against the Dallas Rattlers for the final game of opening weekend of the 2019 MLL season.  Another close game for the fans with the exception of the third quarter when the Bayhawks would outscore the Rattlers 4-1.

Chesapeake would have six different scorers in the contest.  Lyle Thompson would lead the pack (4g, 2a); Nick Mariano (3g, 1a); Colin Heacock (3g); Brendan Bomberry (2g); Steele Stanwick (1g); and Isaiah Davis-Allen (1g).  Niko Amato was in cage with 11 saves on 19 shots on goal.  Kenny Massa took the face-offs for the Bayhawks winning 18 of 29.

This season will play out very differently as the makeup of each of the teams is quite different from what we saw last year.  It will be an interesting season to watch and it’s anyone’s guess who will be crowned the 2019 MLL Champions.